These are the people that believe that Constitutional Rights are reserved only for them and the Left-Wing.

Rush Limbaugh agreed to match the winning bid all of which would be donated to the Marine Corps-Law Enforcement Foundation Inc., a nonprofit organization in New Jersey that provides scholarships and other assistance to families of marines and federal law enforcement officials who die or are wounded in the line of duty. Mr. Limbaugh is a director of the organization, which had total revenues of $5.2 million last year. 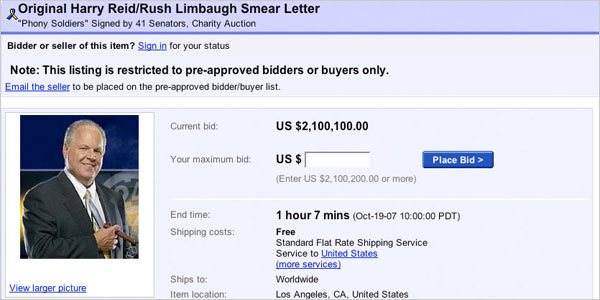 When the eBay auction closed yesterday afternoon, the winning bid was $2.1 million. It is the largest amount ever paid for an item sold on eBay to benefit a charity. With Rush Limbaugh's contribution of the matching funds, the organization raised over $4.2 million. None of the forty-one Democrats that signed the letter bothered to make a contribution to the foundation. Because of his offer to match the winning bid to be donated to the foundation, there was a fear that that wealthy Liberals like George Soros would drive the price of the letter to $20 million or more in hopes of bankrupting him, but those fears were unrealized and unwarranted. It is doubtful that any Liberal wealthy enough to do achieve this would not be interested in making any kind of donation to this charity.

When the eBay auction closed Friday afternoon, the winning bid was just over $2.1 million. It is the largest amount ever paid for an item sold on eBay to benefit a charity. With Rush Limbaugh's contribution of the matching funds, the organization raised over $4.2 million.

In a statement on the floor of the Senate on Friday, October 19, 2007, Mr. Reid praised the auction. "I strongly believe that when we can put our differences aside, even Harry Reid and Rush Limbaugh, we should do that and try to accomplish good things for the American people," he said. While Senator Reid tried to take credit for the money raised for the charity, neither Senator Reid nor any of the other 40 Democrats that signed the letter bothered to make a single contribution to the foundation.

Back to the Top

Back to Enemy Targets